It's taken about two years to wind up for the swing, but national teacher unions have been relentless in their attacks against school choice during the current legislative cycle. As in the past, they have been leaning heavily on their friends in the media and in state governments to push for ever-tighter restrictions on school choice.

The union employees themselves derive all of their salaries from union dues, so it shouldn't be surprising to anyone that anything that grows that source is what they'll encourage and feed. The other side of that coin, however, is more sinister--they diminish, attack, and strangle anything that threatens to reduce union dues. As it happens, the vast majority of charter school teachers are not members of a union.

At its annual "Representative Assembly" meeting in 2017, the largest teachers union in the United States, NEA, adopted "New Business Item 47." This item states:

NEA will develop and promote resolutions that local associations can introduce at school board meetings calling for county-wide and state-wide moratoria on new charter school authorizations in every state that has legislation authorizing the creation of charter schools.

Two years later, the local affiliates of NEA have made inroads with legislators in several states on this initiative: 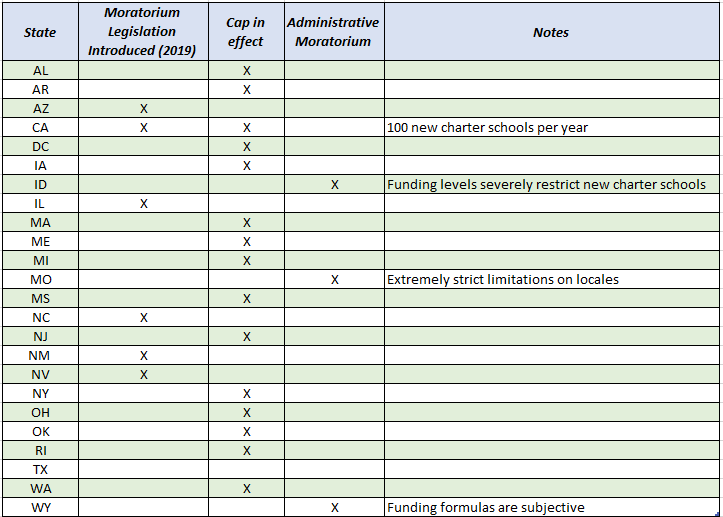 A quick look at the sponsors of the proposed legislation in each state turns up some predictable results.

For instance, State Senator Daniel T. Blue, Jr. (D-NC), received $25,700 from North Carolina Association of Educators during his 2016 re-election campaign. During that year, NCAE took in $7,032,140.00 in "association" dues from members across the state.

Even with fervent public support from school choice advocates, charter schools will continue to find it difficult to overcome the moneyed power of teachers unions.

Your support of the family's right to choose what's best for their children is vital. How can you help?