Arizona families have been through some difficult times lately due to some extremely poor judgment and potentially illegal handling of personal student information. Some of these families, unfortunately, have a growing distrust of elected officials who are expected to safeguard such data.

Voters were put on notice, prior to her election, that Kathy Hoffman was not supportive of Arizona's Empowerment Scholarship Account (ESA) program, even though the State Superintendent of Instruction is responsible to administer it. So, while it's disappointing that her administration has repeatedly, and very publicly, mishandled it, not everyone is so surprised anymore. 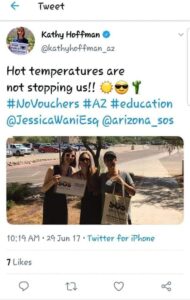 I contacted several families whose children participate in the ESA program to ask for their experience. What follows is each of their responses, unfiltered and unedited. Their individual experiences should help to inform legislators, voters, and citizens about the program and Superintendent Hoffman's administration of ESAs.

Before Ms. Hoffman was in office we had clear cut approvals and denials. We didn’t have absurd wait times for contracts. Last summer I had to spend nearly 4 hours on the phone waiting to get my son’s correct contract because the one sent to me by ADE was incorrect. I know other parents who spent months waiting for their contract. This just didn’t happen before. We have curriculum and therapies that are approved for one parent and then denied for another. Just a lot of inconsistency and fighting to get what is needed and outlined for us in the handbook.

I have two boys in school that qualify for ESA currently because they have IEPs. Without ESA my oldest boy would be pulled out of his classroom for nearly 60% of the day every day. My son already struggles with social interaction, norms, behavior and relationships. How would he ever make friends if he isn’t in the classroom? Through ESA we’ve been able to provide him a quality education at a private school with a small class size and a one on one aide for him. My son has friends that are neurotypical and otherwise in his class. He is thriving! ESA has also provided us ways of paying for therapies (like social groups for him to learn social skills and adaptive skills) and survival swim (which is extremely necessary for my child’s diagnosis). We are a one income family and health insurance doesn’t even pay for these specialized therapies and lessons.  Both my sons have thrived in a small, loving, and tight knit community of learners that otherwise would be impossible for us to provide for them. My children love school and love learning.

I have not had any [contact with ADE or Arizona SOS] as of yet. I avoid SOS.

I found out about the share through the media the night it occurred. ADE didn’t inform me until the following morning.

I am an ESA mother, one of the parent plantiffs on the Goldwater lawsuit on behalf of my younger daughter, and most recently, the creator of Empowered Arizona Families.

I (with the support of many other ESA families) started EmpoweredAF in order to have an entity of ESA Families that can speak for ESA Families.

For me, one of the most frustrating aspects of this failure to protect our private information is that the media was the first place we heard it from, not the department, and immediately story after story seeking comment from ADE, SOS, and Capitol Times, but no one was seeking comment from the families that were affected. It took a couple days before any direct interviews from families took place. While it is great to have entities that are supportive of our program, like Goldwater or AFC, that can speak favorably about us, they can't speak FOR us.

One of the biggest security of private information stories in AZ comes out, in one of the most contentious and political spheres of society, and the victims of the data release have no public voice. So we've decided that from now on, there will be nothing about us, without us.

As a mother of a child with special needs it is frustrating to have to fight for my kid's needs.  What is more frustrating is organizations that are against the program that are willing to leave special needs kids as roadkill in pursuit of their agenda.

Our ESA children have targets on their backs by rhetoric professors that sound like they have no clue what is going on. They do a disservice to their followers by misinforming them from every angle that they can. The fact that Superintendent Hoffman walks side by side with this progressive anti school choice group is very telling that she does not have the best interest of every Arizona student when it comes to their education.

Our ESA recipients have been taking a beating by this progressive anti school choice group, that Superintendent Kathy Hoffman walks with. Its infuriating that these "power hungry" rheroroc professors and teachers will go as far as they have when it comes to any child's education. The fact that Spt Hoffman has not spoken out against SOS's involvement and revealing of information from the leaked documents says a lot about what she thinks of the children on the ESA program. It also shows that this group of people are very unethical...it’s just upsetting knowing that these are the people that are teaching Arizona's kids. Hoffman doesn't care about ALL children...and it shows.

This has not been handled well at all.  Not only should it never have happened, but once it did, all families involved should have been notified by ADE immediately.  Instead, I first learned about the data share from a newspaper article.  We did receive a generic email the following day from ADE explaining that there had been a data share, but it wasn't until the information was all over social media, the newspaper, and the news stations.  By the time we received the email, SOS was already twisting and using the private information to slander ESA parents.

The ESA program has changed our family's life.  In just over one semester of using ESA to utilizing the correct tutors, therapies, and curriculum for their individual needs, my "I can't read" daughter has become an avid reader.  My son who was at a K/1st grade level is beginning 2nd grade work this week, and my son who struggles with trauma induced anxiety among other things has literally gotten his life back and is moving forward once again.